Ethereum Classic, which many top crypto-currency enthusiasts dismissed as a scam or knockoff, has morphed into a meaningful blockchain project with a higher trading volume than ethereum itself.

Ethereum Classic is listed on top crypto-currency exchanges and more service providers are adopting the new alternative blockchain, possibly with an eye towards introducing new services.

Demand for Ethereum Classic arose after the DAO – Ethereum’s $150 “decentralized” fundraising vehicle – was hacked for $56 million in funds. Although marketed as an Ethereum “decentralized autonomous organization”, Ethereum developers immediately called for a hard fork to undo the hack. That hard fork took place last week. In its wake, a new blockchain project  - Ethereum Classic – highlighted a recently sparked theory of crypto-currencies: a crypto-decentralist theory. That is, a group of people who opposed the Ethereum hard fork did something about their opposition. They started their own coin.

Some of the creators and participants behind Ethereum Classic say they’re opposed to the Ethereum hard fork. Thus, they elected to launch their own chain following the history of the old, compromised Ethereum chain. They don’t mind that, theoretically, the one player hacked the DAO and controls $56 million in ether classic – heck, maybe some see that player as an asset to the chain.

Regardless, Ethereum Classic (ETC) has seen its volume skyrocket. It’s currently the sixth largest alternative crypto-currency on the net, according to CoinMarketCap.com. 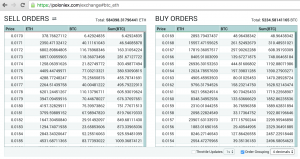 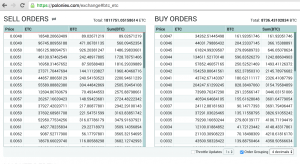 Vitalik Buterin has commented that a new blockchain using the Ethereum code is welcomed, but ETC continues to eat away at ETH volume.

The market cap of ETC is more than $235 million. Since ETC’s introduction on July 26, the volume of ETH has declined from a $1.2 billion market to approximately $950,000,000 million. Over the past 24 hours, volume in ETC is nearly four times that of ETH’s volume on popular crypto-currency exchange Poloniex. 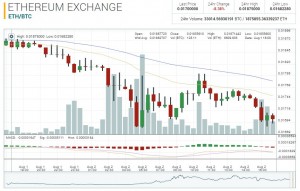 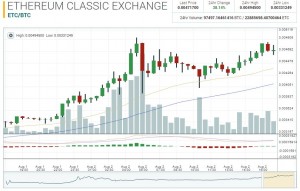 That success has only led to increasing press coverage, and inspiration for this contingent of the Ethereum industry to maintain its chain based off the old Ethereum history, including the $56 million hack. Though, that isn’t always a recipe for success. The volume on Dogecoin, the digital currency which propelled the Jamaican bobsled team to the Olympics, has not meaningfully increased in quite some time.

From here, cryptocurrency enthusiasts know the story well. Miners could begin seeing profit potential in securing the Ethereum classic chain.  If so, they would secure Classic’s distributed ledger.

Is this the end of Ethereum? Certainly, the blockchain projects credibility has been damaged and this might spark a debate about the ledger’s overall usefulness, as pondered on Ounce.Me many months before the hack of DAO’s ether funds.

Stay tuned to Ounce.Me for more thoughts on Ethereum.