Is Timothy Geithner A Bro?

“Smart Bros can turn the broness on and off when they have to. They are not truly dedicated but parts of them resemble a bro. If they had to they could get rid of the bro accent and swagger and be a normal guy.” 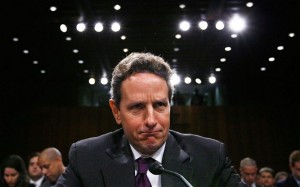 Timothy Franz Geithner, born August 18, 1961 in New York, traveled widely in his youth, having lived in East Africa, India, Thailand, China and Japan. Upon graduating from Dartmouth College, where he studied Chinese and Japanese and obtained degrees in government and Asian studies, he would go onto earn a master’s.

At Dartmouth, he worked for a short time as an event photographer in college after gaining an interest in photography in high school. Geithner earned his master’s in International Economics and East Asian studies in 1985 from John Hopkins. Henry Kissinger then gave Geithner a job as a researcher. He joined the Treasury Department staff around 1988.

As The Economist notes, Geithner “snowboards, has tried skateboarding and exudes a hipster-wonkiness, using ‘way’ as a synonym in ‘way consequential.”’ He also underscored his points before assuming job as Treasury Secretary with the word “fuck.” Geithner fly-fishes, surfs and plays tennis, as well. It seems, in some ways, Geithner might just be a normal dude.

“In temperament he seems similar to Mr Obama: he is suspicious of ideology, questions received wisdom, likes a competition of ideas and is keenly aware of how uncertain the world is,” The Economist describes.

Despite a reportedly laidback proclivity, Geithner played key financial roles at decisive turning point in our nation’s history. As head of the Federal Reserve Bank of New York, he oversaw the TARP bailouts. Shortly thereafter, he became Treasury Secretary. He feels a “great honor and privilege” having served in the positions.

Heavily criticized throughout the confirmation process to Treasury Secretary for his role in the federal economic bailout at the Fed branch in NY, as well as the disclosure that he had neglected to pay over $34,000 in federal taxes, Geithner plays protagonist in many entertaining debates on YouTube between he and other members of Congress throughout his career. The heat was bi-partisan.

“You had every opportunity — every opportunity — to weigh in on behalf of the American people and make these people [Wall Streeters] take a new deal and make them take a haircut,” scolded a scathing Rep. Stephen F. Lynch, (D.-Mass.). “You scalped the folks on Bear Stearns — two cents on the dollar they got! The folks at Goldman Sachs got 100 cents on the dollar and that is totally unacceptable.”

Geithner had his reasons for the bailout, citing the devastation it could have leveled for American families and businesses had there been no bailout. In his view, the economy would still be falling, the US dollar would still be falling, job loss would be skyrocketing. He denied the Federal Reserve would grow more powerful through TARP.

“Our proposals for the additional authority we’re giving the Fed are actually quite modest and build on their existing authority,” he maintained.

Geither, when lambasted by members of Congress about the Fed’s mandate, would clearly state that Congress created the Federal Reserve. When members of Congress would imply that people in the Federal Reserve and the Treasury department were working against the interests of the American people, Geithner vehemently would take exception, offended at the notion that his colleagues are something other than good people “working under extraordinary circumstances” amid the financial panic.

When debating an issue in Congress, Geithner would often be derided regarding the long term fiscal outlook of the nation. He’d note that, while he doesn’t disagree there are a lot of unfunded liabilities and uncertainty, the big picture was not up for debate, and try to steer the conversation towards, for instance, the budget at hand. Interestingly, the famed libertarian Senator Ron Paul and Geithner seemingly respected each other: 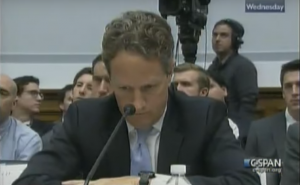 Senators opposing Geithner’s confirmation chastised his failure to pay federal taxes for Medicare and Social Security between 2001 and 2004, while he was working as a senior official at the International Monetary Fund. “I used Turbo Tax to prepare my returns,” he famously said in Congress. Fast forward to 2:10 seconds for Turbo Tax quote. 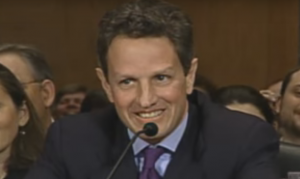 “I used Turbo Tax to prepare my returns.”

Geithner paid the taxes for 2003 and 2004 voluntarily after a 2006 IRS tax audit. Not required to pay back taxes, he did so anyway ahead of becoming Treasury Secretary likely due to urging by the Obama Administration. Despite Geithner’s status as a registered independent, his confirmation is largely thanks to Democrats. 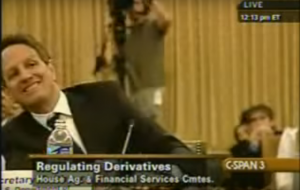 Geithner’s appointment to Treasury Secretary was the most important decision President Barack Obama had made to that point. As USA Today stated, “someone to grab the reins of a trillion-dollar-plus program to shore up the world’s largest economy, probably in the middle of a severe recession, and at the right hand of a chief executive who’ll be a rookie himself.”

The USA Today called the Treasury Secretary “one of the most powerful and stressful jobs in government” amid an economic crisis.

In the 2008 campaign cycle both Republican John McCain and Democrat Barack Obama mentioned investor Warren Buffett as a possible candidate for Treasury Secretary. Geithner was considered one of the “seasoned economic professional[s]” who could be nominated by either candidate. At that time, as the president of the Federal Reserve bank of New York, Geithner was quickly aging while overseeing TARP, where his service will eternally be tied to the bailouts of Citigroup Inc., General Motors Co., American International Group Inc. and other Wall Street firms. 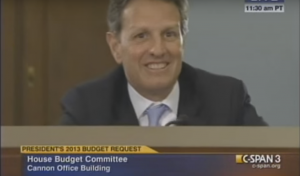 “We’re not coming before you today to say we have a definitive solution to that long term problem; what we do know is, we don’t like yours.” – Geithner to Paul Ryan on debt

Geithner first started in government in the late eighties in the Treasury Department. He worked for a short time for the Council on Foreign Relations. Thereafter, he worked as a senior official on the International Monetary Fund. After the IMF, he joined the Fed of New York as President. In 2009, he became Treasury Secretary under President Obama, where he worked until January 2013.

His overseeing of the Treasury Department’s Troubled Asset Relief Program, which included $700 billion, came before his work in 2009, amid Europe’s debt crisis, as chief U.S. liaison to European officials.  He also pushed for May 2009 stress tests for big banks, soon thereafter advising Congress on the Dodd-Frank financial overhaul law, and thus the creation of a consumer-protection bureau, tightened derivatives trading and a liquidation process for failed banks. Also per that bill, bank-holding companies of $50 billion and more in assets would be placed under Fed supervision. Geithner has long been a tax reform proponent.

“I believe there is no credible argument to be made that the purpose of government is to borrow from future generations of Americans to finance an extension of tax cuts for the top 2 percent,” Mr. Geithner once said. 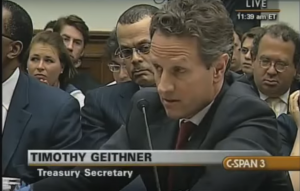 A matter of public record: “As you know, [my colleagues] worked for Goldman Sachs.”

Geithner’s book on the US financial crisis, “Stress Test: Reflections On Financial Crises,” is a “clear” and useful portrayal of how Geithner saw the crisis. In the chapter, “The Fight For Reform.” Geithner  deals with most of the underlying issues – the repeal of Glass-Steagall, derivatives, the ratings agencies and so on. But does not do so at great depth. Reviews of the book, in general, fall back on the same question: How did Geithner, who seems inexperienced, get the position in the first place? Maybe the dude just had the right bros.

In that book, he does give some insight into his upbringing:

My father soon joined the U.S. Agency for International Development and moved us to southern Rhodesia….

When I was six, the Ford Foundation asked my father to help with programs in New Dehli….my parents friends were Indian artists, activists and intellectuals, as well as expats who worked at interesting places such as Oxfam, CARE and the World Bank…

[J]ust as I was feeling comfortable in my own country, my parents announced that we were moving to Thailand, where my father was going to run the Ford Foundation’s programs in Southeast Asia…

There was a coup in Thailand while we were there…

After overseeing the government bailouts to the nation’s largest companies in the wake of the 2008 financial crisis, and after 25 years of public service, Geithner joined private-equity firm Warburg Pincus LLC as president. At the New York-based firm, Geithner helps manage company affairs, investments and communication with investors, all while receiving a healthy raise over his former public positions.

Geithner said he never planned to work for a bank, but, rather, had interest in joining an investment firm. Warburg Pincus did not receive bailout money, though in 2010 it did invest in firms which received money from TARP. Bancshares Inc, a Pennsylvania-based bank holding company, received $150 million. Sterling Financial Corp. reportedly repaid the $303 it received. Pincus holds approximately $35 billion in assets as of 2013 in over 125 companies.

History will remember Geithner for his Stress Test innovation, which stoked out the markets that things weren’t so bad. Among the criticisms against him will be TARP – he fucking swears not doing so would have been ‘way consequential’ – and his aversion to baseless optimism. As Charles Lane writes for Washington Post:

Geithner’s aversion to “excess optimism” was not always an asset for him at Treasury. A more buoyant secretary might have been better equipped to reassure the public amid hard times, as well as less vulnerable to the political slings and arrows that ultimately made Geithner yearn to leave Washington. Yet to the extent that he had a knack for imagining the worst, and how to avoid it, he may have been the right man for Treasury at the right time. Certainly we could have done a lot worse.

Geithner was asked by Blythe Masters to join the Board of Directors of Digital Asset Holdings, the former JP Morgan head of Commodities Blockchain company, but he declined.

Geithner admits readily the bailouts created moral hazard in the markets but that not bailing out the banks would have been destructive. During that time, the hardest decisions were “consequential”; good ideas were “cool”; better ideas were “compelling”; and the best ideas were at “the optimal frontier.” Geithner believed that during a crisis “plan beats no plan,” and that bad results were “dark.” Geithner disliked the “theatre” of the job as Treasury Secretary, and, sometimes, he’d just admit in discussions, “I have no fucking idea.” Perhaps betokening of Geithner’s Asian background, Warburg Pincus is currently looking to raise $2 billion for a new China fund.

One thought on “Is Timothy Geithner A Bro?”