Is GAW Miners on the brink of going full ponzi? 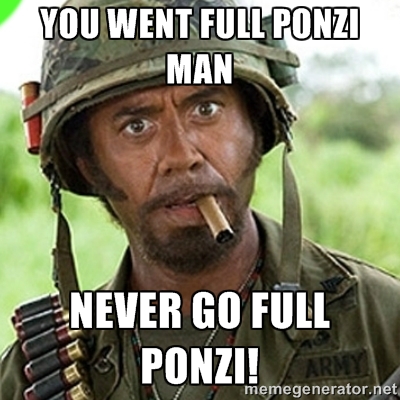 This statement can just as easily be extended and adapted to the gambit of “cloud mining” companies which have flourished in the Bitcoin space in recent months. Many of these companies teeter dangerously on the brink of ponzi schemes. The basic gist is:

1. You pay $X amount of Bitcoin for “managed” mining hardware — hardware you never get to hold in your hands, but whose existence is guaranteed by the hosting companies
2. You receive $X amount of Bitcoin per day from your virtual mining hardware, minus a maintenance fee
3. Your payout schedule is such that it is highly unlikely you will ever see an ROI on your cloud mining

When examining cloud mining from the triad above, it’s likely that many companies in the space are orchestrating a techno tour de heist that would make even Madoff green with envy. Given that there are no guarantees of profits, and with Bitcoin difficulty on a vertical ramp up, it’s accepted that the cloud mining product ultimately boils down to a ponzi fit for a gambler’s tastes.

Are you a betting man? Josh Garza, CEO of GAW Miners, certainly is. He recently purchased the domain name www.BTC.com for $1.1 million dollars.

Are you feeling lucky? Josh certainly is. So lucky, in fact, that he has decided to cook up a brand new creation for the GAW umbrella : HashCoin.

Now, no one knows exactly what HashCoin is (there is no whitepaper publicly released, EDIT: Whitepaper has been released: https://hashcoin.com/white-paper and HashCoin isn’t guaranteed to be its final name), however there is already quite a few interesting “Get Rich Guarantees” being made to all the hapless cloud mining customers eager to turn their failing mining hardware ROI into a quick pump and dump.

A recent post by the company details this interesting tidbit:

Our Market Analyst and our banking partners have released their final market numbers for HashCoin. I will save the juicy stuff for later, but the
summary is this:
• HashCoin will go “public” for just over $20 a coin.
• Our customer ICO HashPoint round, for our mining members, will be at “less” than $4 a coin.
Legal note: Remember, this is NOT the FIAT round. This round, at these prices will be limited to purchases with HashPoints only. Our banking partners will NOT allow more coins to be purchased than with the available pool of HashPoints.
“HashCoin” is the code name for the coin, not the actual name that it will bear. We purchased the rights to the most popular name an online currency could ever have. That deal finished today.

To sum it up, GAW is releasing a new coin, which will be made available to their “banking and market analysts” as well as GAW Cloud Mining customers for a mere $4 a coin, with a target “ITO” price of $20 / coin. Josh, you should’ve listened to Kirk. Perhaps you’ve had too much a taste for the good life, buying million dollar domains and flying around on private jets without even having reached the ripe old age of 30.

It’s time to step back and realize that just by swapping the P for a T in “IPO” you are not avoiding regulatory scrutiny. Couple this with very suspicious nature of the cloud mining scheme and you have a recipe for disaster.

We don’t need another GOX, another BFL, another Mintpal. Take heed, hold your Bitcoin tight. There are snakes on this private plane.

7 thoughts on “Is GAW Miners on the brink of going full ponzi?”